It’s been exactly one month since returning from my Great American Calorie Accounting Summer Book Tour, and I miss my scrappy minivan every day!!  The hometown Chicago audience has certainly been getting an earful though–we’ve been in the papers, on the tee-vee, and in various urban and suburban bookstores and gift shops and health clubs, singing the gospel, LOLing those love handles away!  But I miss #tourlife so badly.  Someone give me an RV and a million dollars and I’ll be the happiest camper (truly) there ever was!!!

You might recall that before heading out on the road, Travelzoo and Huffington Post asked me to share my plans for keeping true to my diet on tour.  That was cool, and I had good intentions, but…

Dieting on vacation is a terrible idea.

I am apparently full of false promises to myself, because I never did one calisthenic in the back seat of the van and I only lived on vegetables for one of twenty-one days.  I ate my way through a good cross-section of our splendid United States.  Because I had to!  Because I was on vacation!  HOWEVER!  (And here’s the good news.)  I still remained “accountable” in my own sneaky way, and good gracious, I am proud to tell you that I DIDN’T GAIN A POUND!*

*Eating as many hot dogs as Joey Chestnut over 4th of July Weekend is another story, but for the purposes of the 3-week tour at hand, let’s call it even. 🙂 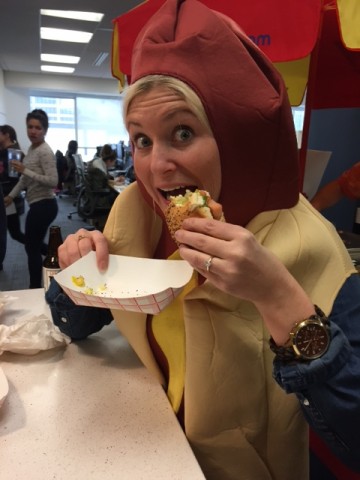 Wooooooo doggies that was fun!!!  I had the best time ever with Chicago’s Kathie Lee & Hoda, Melissa Forman & Jeanne Sparrow!!!  Thank you so much WCIU and everyone at “You & Me This Morning“–I had such a blast rapping about how to get the most bang for your caloric buck in our “Designer Impostor” morning show segment!  Check it out!– 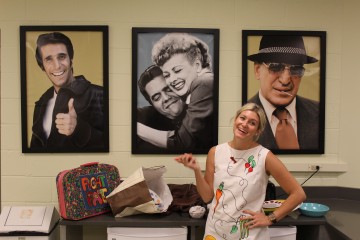 #star like all the rest of ’em in the green room 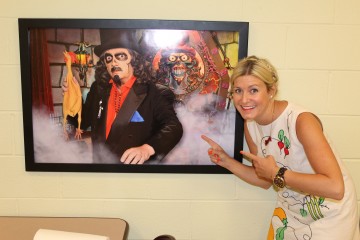 me and my man svengoolie 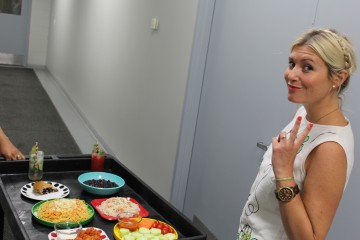 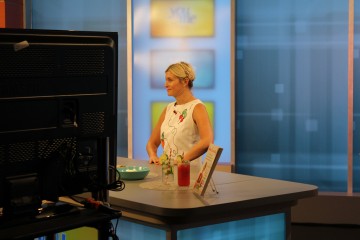 doing my mantra: “poop is funny, poop is good” 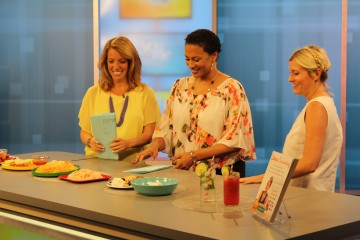 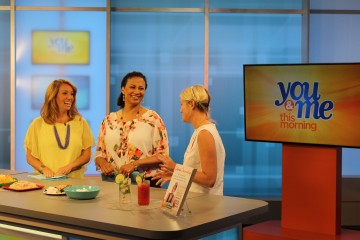 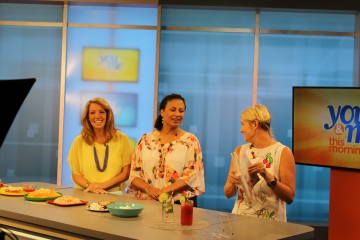 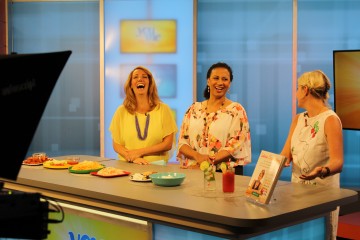 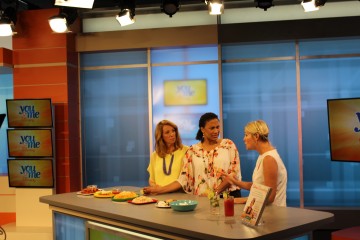 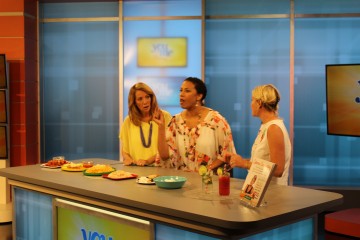 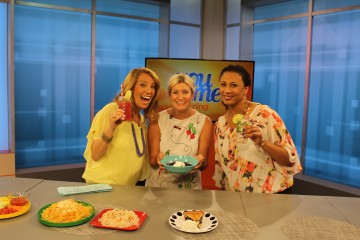 If you caught me bright and early on WCIU’s “You & Me This Morning,” you got a sneak peak at some low-cal ideas to help deflate that Fourth of July intertube around your waist.  As you know, we Calorie Accountants equate calories to cold hard cash-money, and we’re constantly scouring the sales racks to get the most bang for our caloric buck.  Here are the “Designer Impostor” knockoffs that won’t break the bank but taste like a million bucks.

Directions
Wash a bushel of grape tomatoes. Throw in a bowl. Peel a cucumber and slice into 1/2-inch thick medallions. Throw in the same bowl. Remove a handful of baby carrots from a bag; dump ’em in too. Pour as much freaking zero-calorie buffalo sauce as you want into a lil’ dipping dish. Take out to living room. Find an episode of Felicity on Netflix, dip your crudités in your hot sauce, and imagine you’re eating 25¢ buffalo wings at the sports bar down the street as you work through internal conflicts about Noel versus Ben.

–This shit is legitimately a miracle.
–It’s best to eat it late at night, as a drunk/high munchie, so you’re not as aware of the hard-to-shake fishy stink.
–Be mindful if you’re able. Sometimes I’m so grossed out by the stank and the thought of the stank, even if the stank ain’t there no more, that I just pile on more and more Parmesan cheese to mask the stank, and soon I’ve added as many calories as if I’d just eaten real noodles. So. Just know what you’re getting into.

Directions
Take the package of stink noodles, cut them open, let them pour out into a strainer with all their stank. Rinse with cool water. Meanwhile, put some water on the stove and bring to a boil. When stink noodles are satisfactorily rinsed, boil ’em for 2–3 minutes, until their stink has subsided. (Somewhat. It will never disappear completely.) Once you’ve extinguished the stink to the best of your ability, strain and dry a bit with a paper towel. Pour I Can’t Believe It’s Not Butter spray all the hell over the noodles, and plop squirmy mess in a dish. Smother with hot sauce and Parmesan. Plug your nose and bon appétit!

Directions
Dump a washed bushel of fresh blueberries into a microwave-safe bowl. Take a fork or a spoon and lightly mash blueberries, until about half of them are popped. Stick bowl in microwave (you might cover with a paper towel if you don’t want purple explosions all over your microwave), zap on high for 90 seconds. During this time you can take a quick wee or pluck a stray eyebrow. When timer goes off, remove bowl from microwave—Achtung! Could be HOT!—and mash hot blueberries a little more, to a liquidy pulp. Leave a few whole berries for the illusion of a pie-filling-like confection. Open pack of Stevia, sprinkle atop your soup, stir, and go to town! If you can afford it, add a dollop of fat free Cool Whip for a 15-calorie à la mode bonus. (To earn it, you can run in place for 1.5 minutes while your soup is microwaving instead of tending to your brows.)

DESIGNER – Mojito, 260 calories
IMPOSTOR – Watermelon Faux-jito, 51-116 calories (depending on if you’re raging or not)

Directions
Take 2 cups cubed watermelon and throw into a blender. Puree until smooth. Fill 2 tall, summery glasses (probably from Anthropologie) with ice. Distribute watermelon juice equally into glasses. Top off with delicious Fresca zero-calorie citrus soda! Garnish with a fresh mint leaf. If you have straws—preferably the hard plastic kind shaped like hearts or stars, or even leftover penis ones from a bachelorette—it really completes the “fancy drink” feeling.  And if it’s a party, throw in some Bacardi! Pitbull knows what’s up!